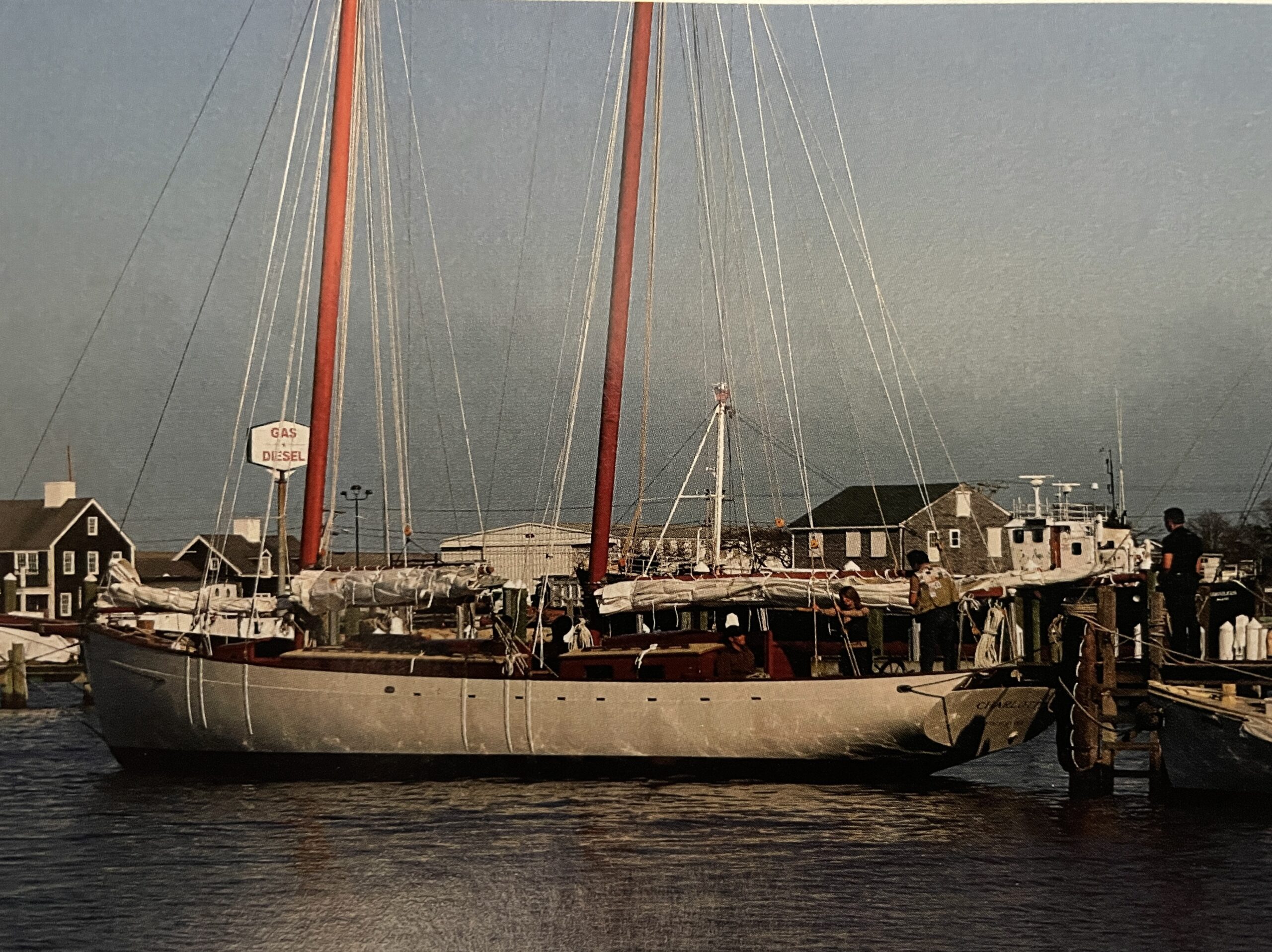 For nearly 30 years, Ross Gannon and Nat Benjamin have carved out a fine reputation with their wooden boats.

Take a look around Vineyard Haven Harbor on Martha’s Vineyard, beyond the occasional sparkling, super-sized poweryacht and the shiny white hulls of some fiberglass sailboats, and you’ll see a little slice of sailing nirvana. Scattered throughout the harbor are dozens of beautiful wooden boats of all kinds — rowboats, daysailers, catboats, schooners — with their planked hulls, polished wooden decks, and lovely classic lines that sailors longingly admire like photos of an old girlfriend.

These are the kind of boats that even a landlubber can appreciate. And they help make an already scenic harbor a little more beautiful. It’s a nice perk for Vineyard Haven; a rewarding byproduct of being home to the builders of some of the world’s finest crafted, most beautiful wooden boats, Ross Gannon and Nat Benjamin.

Since they started the modest boatyard on the shores of Vineyard Haven in 1980, Gannon and Benjamin Marine Railway has become kind of a shrine to the craft of wooden boatbuilding. Using plank-on-frame construction techniques popular in the 19th century, they have built boats ranging in size from an 8-foot dinghy to a 65-foot schooner. They built a 25-foot Canvasback daysailer for James Taylor. After General George S. Patton’s 1939 Alden schooner When and If was wrecked in a 1990 storm, Gannon and Benjamin bought it, rebuilt it, and now charter it. Along the way, they’ve become rather famous in boating circles for the quality and beauty of their vessels. Their formula for success is simple: They passionately love what they do, so they do it well.

“You build a reputation by the boats you build,” says Benjamin.

The idea for the boatyard was born when Gannon and Benjamin met in Vineyard Haven in the 1970s. The two sailors loved working on wooden boats, and eventually they kicked around the idea of starting their own boatyard. Benjamin had been inspired by boatyards he’d visited in Morocco and Martinique, places with laid-back atmospheres where sailors could work on their own boats or get a professional to do work if need be. They decided a similar boatyard would be a good fit on their home island of Martha’s Vineyard.

In an ironic twist, the boatyard that has gained a worldwide reputation for great craftsmanship was born in the wake of a company that has a reputation as the antithesis of craftsmanship: McDonald’s. In the late 1970s, McDonald’s wanted to acquire a property on the shore of Vineyard Haven and open a restaurant. But there was a groundswell of opposition by residents. Eventually, McDonald’s backed off, a local family bought the property and, wanting to preserve the area’s seafaring culture, leased it to Gannon and Benjamin. They continue to lease it today.

Despite their success over the years, Gannon and Benjamin’s boatyard is all business and zero pretension. Those who have never been there might have a hard time finding it by either land or sea. There are no giant signs advertising its presence. The yard is a narrow slice of beachfront a few hundred yards from the Vineyard Haven ferry terminal. The brown, wooden building that houses the operation looks like a large shed or barn, with some of the wooden siding chipping and falling off. The window frames look like they haven’t been painted in 28 years.

Inside, the smell of wood permeates the air. A small rowboat being worked on is propped on wooden horses. Curls of wood that have been planed off the boat are scattered along the floor. Sawdust is everywhere. Lining the wall are saws, hammers, ships wheels, beat-up drills, files and wrenches. Boards of wood are stacked in the rafters and leaning against walls.

Up a flight a stairs, above the workshop, is the sail loft. In the room are a half-dozen sewing machines. Tape and scissors hang on hooks. A large sail is spread out on the floor. And up on the wall hang two large maps of the world.

The fruits of the labor that goes on in this modest building can be seen all around the yard. Outside, eight small wooden skiffs lie next to each other near the beach. On the other side of the building is a 50-foot work of art — a wooden schooner with a white hull and maroon trim that Benjamin built and named after his grandmother, Charlotte, an adventurous woman who inspired him.

Operating the boatyard is a full-time job for both Gannon and Benjamin. They have roughly 15 full-time employees, along with occasional friends and family who stop in to do some work or just to be around boats.

When the two sailors started building wooden boats nearly three decades ago, it might have been seen at the time as a quaint attempt at building a style of boat whose time had passed. Other materials, such as fiberglass, had long since taken over the boating world. But, looking back on it from today, it looks as though they were ahead of the curve. Pick up any boat magazine or flyer today and you’ll see plenty of articles and ads about boats made of wood.

“There is a bit of a renaissance in wooden boatbuilding,” says Benjamin. Wooden boats are in more demand today than they’ve been in decades. Besides being more beautiful, Benjamin says they are also more practical in that they last indefinitely. It is easy to replace parts of a wooden boat’s hull. He says they’ve worked on wooden boats that were 90 years old. Wood is also a lot more pleasurable to work with, he says. Wood doesn’t need fancy adhesives or solvents. And nobody is going to find materials such as fiberglass, aluminum and steel that much fun to work with.

Twenty eight years after they started the boatyard, Gannon and Benjamin are as busy as ever. Current projects include a 24-foot catboat, a 36-foot lobsterboat and a 45-foot sloop. There’s no slowdown in sight for them, and why would there be? They are doing what they love, in a place that they love, surrounded by friends and family.

“I have to pinch myself sometimes to think of the life we’re living and what we’re doing,” says Benjamin. “It’s a pretty nice lifestyle.”