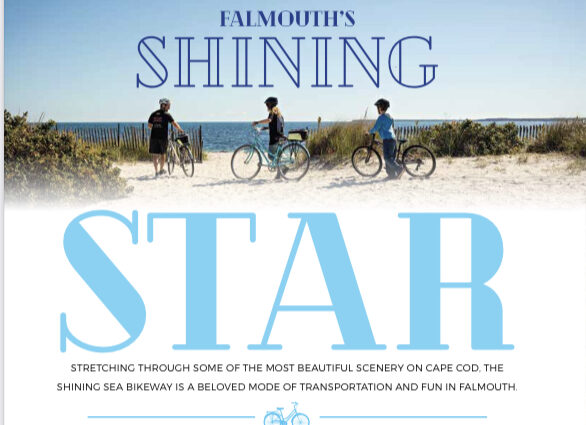 Stretching through some of the most beautiful scenery on Cape Cod, the Shining Sea Bikeway is a belove mode of transportation and fun in Falmouth.

Outside, it was a bright and beautiful early autumn morning. But inside my house, the morning was dark and gloomy – the kind of gloomy found only in a household where a 13-year-old girl resides.

My daughter Emma and I were having a disagreement. My kids had the day off from school, and I had planned what I thought would be a fun family adventure. I’d take Emma and my 11-year-old son, Owen, biking along the Shining Sea Bikeway, a 10.7-mile paved path in Falmouth, Massachusetts that friends had raved about. The bikeway, they said, passes through some of the best scenery on Cape Cod, from salt marshes to cranberry bogs to gorgeous beaches with breathtaking ocean views. I had wanted to ride it for years. Now we were going.

But my daughter wasn’t having it. Her plans for the day included watching TV and texting her friends. She eventually said she’d go, but she wasn’t going to enjoy it.

As we arrived in Falmouth, I mentioned how perfect the morning was for a bike ride, with not a cloud in the sky. Emma responded, “I could still be sleeping right now.”

Our plan was to rent bikes from Corner Cycle, a bike shop that’s been in Falmouth Village since 1988. The shop is a stone’s throw from the bikeway, and from there it’s easy to ride south along Vineyard Sound to Wood’s Hole, or head north along Buzzards Bay past wide-open salt marshes and cranberry bogs.

Devin Enos, the manager of Corner Cycle, greeted us at the shop and told us about the bikeway.

“It really is a beautiful trail,” said Enos. “It gives you a taste of everything the Cape has to offer.”

We had picked a perfect time of year, he told us. In early fall, the air is just right – not too warm or cold – and with most tourists having left the Cape for the season, the crowds on the bikeway are gone.

He set us up with bikes and helmets. Having brought along sweatshirts, waters and snacks, I worried about how to carry them. But the bikes had storage packs with plenty of room for our gear. Enos suggested we head north to view the cranberry bogs, and then turn around and head to Woods Hole for lunch. That sounded like a pretty good plan.

The Shining Sea Bikeway runs through four Falmouth villages, from Woods Hole on Vineyard Sound up along the coast of Buzzards Bay to North Falmouth. It was created as part of a bicentennial project in 1975, and since then has grown to its current length of 10.7 miles. Its name, “Shining Sea,” honors famous Falmouth native Katharine Lee Bates, who wrote “America the Beautiful.” The name is taken from the line, “And crown thy good with brotherhood, from sea to shining sea.”

Pamela Rothstein is a member of the Falmouth Bikeways Committee, which helps support bicycle use in Falmouth. She says the Shining Sea Bikeway has become a treasured part of the town.

“It’s a wonderful asset,” says Rothstein. “It has proved to be the number one tourist attraction in town.”

But it’s not just tourists who use the bikeway. It is hugely popular among locals who enjoy riding on the path or using it for walking, jogging or taking their dog for a walk. It’s also used by some for commuting to work.

Scott Lindell, the chairman of the Falmouth Bikeways Committee, works as a scientist at the Woods Hole Oceanographic Institute. He and several other WHOI scientists ride from their homes to the bikeway and down to Woods Hole each workday. And not just in fair weather. When Mother Nature turns nasty, Lindell says they just dress for the weather and still ride to work on most days.

“The rain and cold don’t bother me,” he says.

I imagine few commuters in Massachusetts describe their commute with such joy as Lindell. Instead of complaining about traffic, Lindell talks about fresh air, scenery and the unique appeal of the Shining Sea Bikeway.

“You really do bike in close proximity to wonderful stretches of water, beaches, salt marshes and cranberry bogs,” says Lindell. “That’s quite unique. I don’t think there’s another bikeway that encompasses all those wonderful features.”

Because it is so appealing, says Rothstein, the bikeway does draw a crowd. And it can be crowded on many summer days. But when people follow the path’s rules and communicate – stay to the right; let people know when you are passing – things work smoothly. The bikeway’s popularity, says Rothstein, is proof that people want bikeways and will use them if communities build them.

“I challenge you to go out on that bike path and find someone who looks unhappy,” says Rothstein. “It’s a mood changer.”

That may be, but my daughter seemed determined to test that theory. We got on the bikeway and headed north. Both sides of the path were heavily wooded for a long stretch. As we rode, cyclists nodded to us as they headed in the opposite direction. Smiling pedestrians waved and said “Hi” as we passed. I turned to Emma. “Having fun yet?” I asked. She rolled her eyes.

Not long into our trip, we came to a lookout on the left that had several benches and a bike rack. It looked out over Little Sippewissett Marsh, where patches of dark water were surrounded by tall reddish-purple grass that swayed gently in the breeze. We lingered to admire the view before riding on.

As we continued north, Emma suddenly zoomed by me. “You’re so slow,” she said with what looked like a half-smile as she passed. Speeding ahead of me, she lifted her feet off the pedals and kicked them out to the side. “Hmm,” I thought.

A little farther north, the thick woods along the bikeway disappeared, dramatically opening up into a wide marsh. This was Great Sippewissett Marsh, a 140-acre protected salt marsh. The kids hopped off their bikes and scampered down to the small river that passed beneath the bikeway.

The river snaked through greenish-yellow tall grass out to a sandbar where about a half dozen bright white snowy egrets were gathered along the river. Beyond them, the marsh stretched out to the wide expanse of Buzzards Bay, where we could see a lone white sailboat on the horizon.

Emma and Owen explored the river’s edge, spotting little fish. As they did, a pair of ducks flew overhead, and we saw a great blue heron spread its wide wings as it landed in the marsh. The kids were having such a good time, we ended up staying much too long.

I had hoped to continue north, where the bikeway passes scenic West Falmouth Harbor, cranberry bogs and Bourne Farm, with more than 49 acres of fields, trails and woodlands. But with us taking our time to enjoy scenic spots – and there are many – we wouldn’t have time to see the entire bikeway. We decided to head south to Woods Hole. We would save Bourne Farm and views of cranberry bogs for another day.

Heading south, both kids now sped up, seemingly more energetic after our stop at the marsh. We passed pull-offs with signs for the Salt Pond Area Bird Sanctuary. Salt Pond has a network of nature trails winding through 41 protected acres. Maps are available at two trailheads along the bikeway.

We soon came to a beautiful sandy beach that looked out onto Vineyard Sound. We found a plaque here honoring Katharine Lee Bates, and we thought it was appropriate as we looked out onto the Sound that it seemed the sea was actually shining today, as the sunlight sparkled on the water.

We parked our bikes and the kids ran down the beach to the water’s edge. Across the Sound we could clearly see Martha’s Vineyard. A handful of boats were on the water, and a ferry was making its way toward Woods Hole. The kids played on the beach for a while, collecting shells. We continued on, but soon they hopped off again when they spied old pilings off a section of beach. A few cormorants on the pilings grew nervous and flew off as my kids approached. Emma and Owen found a few beautiful scallop shells. Owen was excited to find horseshoe crab shells, but was disappointed when I said they couldn’t come home with us.

Approaching Woods Hole, Emma was no longer hiding her enjoyment. She was getting brave. Besides sticking her feet out to the sides of her bike, she was experimenting with riding with no hands. When I told her I didn’t want to end the ride with a trip to the hospital, she playfully stuck her tongue out at me and then rode ahead, with a smile on her face. It seemed the bikeway actually was a mood changer.

As the bikeway entered Woods Hole, it passed through a large parking lot. The bikeway remained well-marked, so it was easy to navigate all the way into the village. At the end of the bikeway, we took a right and went to Pie in the Sky Bakery and Café, where they roast their own coffee and have a huge selection of baked goods, smoothies, sandwiches, soups and salads.

We had worked up a mighty appetite. Owen got a hot dog. Emma and I split a roast beef sandwich. And we treated ourselves to cookies, brownies and apple bear claws. We considered that using restraint, since there were so many more treats we wanted to gorge ourselves on.

We sat down and ate in front of Pie in the Sky, where they have wooden tables set up with green plastic chairs and umbrellas. The kids laughed as small birds landed nearby looking for crumbs.

Happily stuffed, we climbed on our bikes and headed back toward Corner Cycle. Emma weaved her bike back and forth along the path when no one was around, and Owen kept slowing down to let us pass and then speeding by us before letting us pass again.

It seems we’ll be making another trip to the Shining Sea Bikeway. And I expect next time, morning in my house won’t be nearly as gloomy.

To learn more about the Shining Sea Bikeway, visit www.falmouthmass.us/bike.