Food and Beer: A Love Story 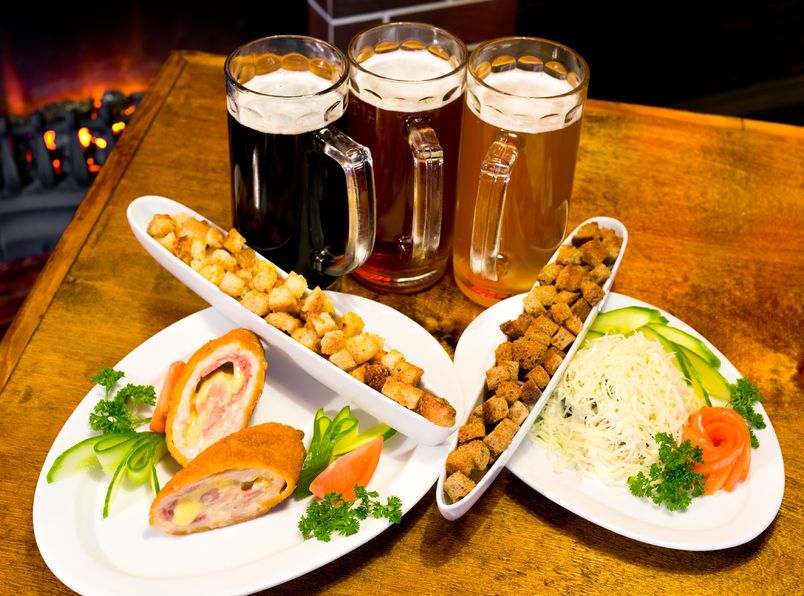 There was a time, not so long ago, when being a “beer guy” (or gal) had certain negative connotations—namely that you enjoyed drinking cheap swill from a can and were someone for who “fine dining” meant including fries with your greasy burger.

How times have changed.

The past 25 years have seen nothing short of a complete revolution in the American beer landscape. Where American beer was once dominated by a handful of giant macrobreweries that canned and bottled tasteless swill, the rise of craft microbreweries over the past two decades has given American beer drinkers a wonderful gift: Taste.

Here in microbrewery-rich New England, we have tons of locally-brewed lagers, pale ales, porters, stouts
and seasonal concoctions to choose from, all with different characteristics and individual tastes. And the
higher quality of these brews has elevated the status of beer, even to the point where it is invading
wine’s territory and accompanying good meals. Nowadays, when people go out to dinner, they don’t
just choose between white or red, but rather whether their meal would go best with a golden ale or a
stout.

Many restaurants even host beer dinners, where guests can experiment pairing particular beers with
certain meals. Stars on Hingham Harbor hosts several beer dinners each year to educate beer-
enthusiasts and to promote local breweries. Brian Barry, who, as Stars’ beverage manager, has the
enviable job of choosing the restaurant’s beer, says when you consider what beer to order, you need to
think about what characteristic the beer will take on with your meal.

“Every beer has its own characteristics,” says Barry. “The more full-bodied the beer, the better it will
work with a heftier, deeper dish. Lighter beer works with crispier stuff like salads and appetizers.”

One of the breweries Stars works with is the Plymouth-based upstart Mayflower Brewing Company. The
company started turning out beer in January 2008, and can now be found at stores and restaurants
throughout the South Shore and Cape Cod. Mayflower’s founder and president, Drew Brosseau, has
deep roots in the area’s beer culture. He is a direct descendent of John Alden — a passenger on the
Mayflower who, coincidentally, was the ship’s beer barrel cooper. The beer barrel cooper was an
indispensible position on a ship in the 1600s, as passengers didn’t drink water, as water would get
bacteria and spoil. Beer, however, would stay fresh because of its alcohol and hops.

Brosseau began homebrewing beer in the early 1980s. After a career in the technology and investment
banking world, he decided to start his own business. And what better way to do it than doing something
he loved: brewing beer?

Mayflower brews a variety of English-style ales — golden ale, pale ale, india pale ale, and porter, plus
several seasonal and specialty beers during the year. Brosseau says the evolution he has seen in the
American beer industry is astounding. When he began homebrewing, there were only a handful of beers
available. Today, he says, the United States has a better variety of beers than anywhere else in the
world, an idea that was unthinkable two decades ago. And with that variety, beer has taken on a new
identity.

“There is a richness and a value that has risen in terms of what this beverage is,” says Brosseau. “Slowly,
people are starting to think of it more like wine. And, as a result, it is getting thought of in combination
with food in a way that it just never was before.”

Mayflower’s Director of Brewing Operations, Matthew Steinberg, enjoys experimenting with beer and
food whether he is at a restaurant or home in his own kitchen. For a recent corned beef meal, he
enjoyed a hefty porter. But for a spicy chicken enchilada, he liked a hoppier beer, the india pale ale. The
hops of the beer helped bring the spice out, and the dryness helped not to prolong it.

For example, the folks at Stars recently paired some of their dishes with particular beers from
Mayflower. They paired their barbecue pulled pork sandwich with Mayflower’s porter. They found the
slow-roasted pork rubbed with spices and sugars goes nicely with the darker, malty thickness of the
porter. Their Steak and Cheese Spring Rolls were paired with the golden ale. Barry says the crisp, easy-
drinking golden ale pairs nicely with comfort food like the fried wrapper of the spring rolls. And the
Buffalo Chicken Rangoons go great with the pale ale. Barry says the pale ale has more hops, and the
spiciness of the buffalo chicken opens up your taste buds to allow you to truly appreciate the hoppiness
of the beer.

The great thing about pairing food is the right beer is what tastes best to you. And the fun part is
experimenting.

“I think the most important thing is not to worry about what is right, but what tastes good,” says
Steinberg. “Fortunately, taste is subjective.”