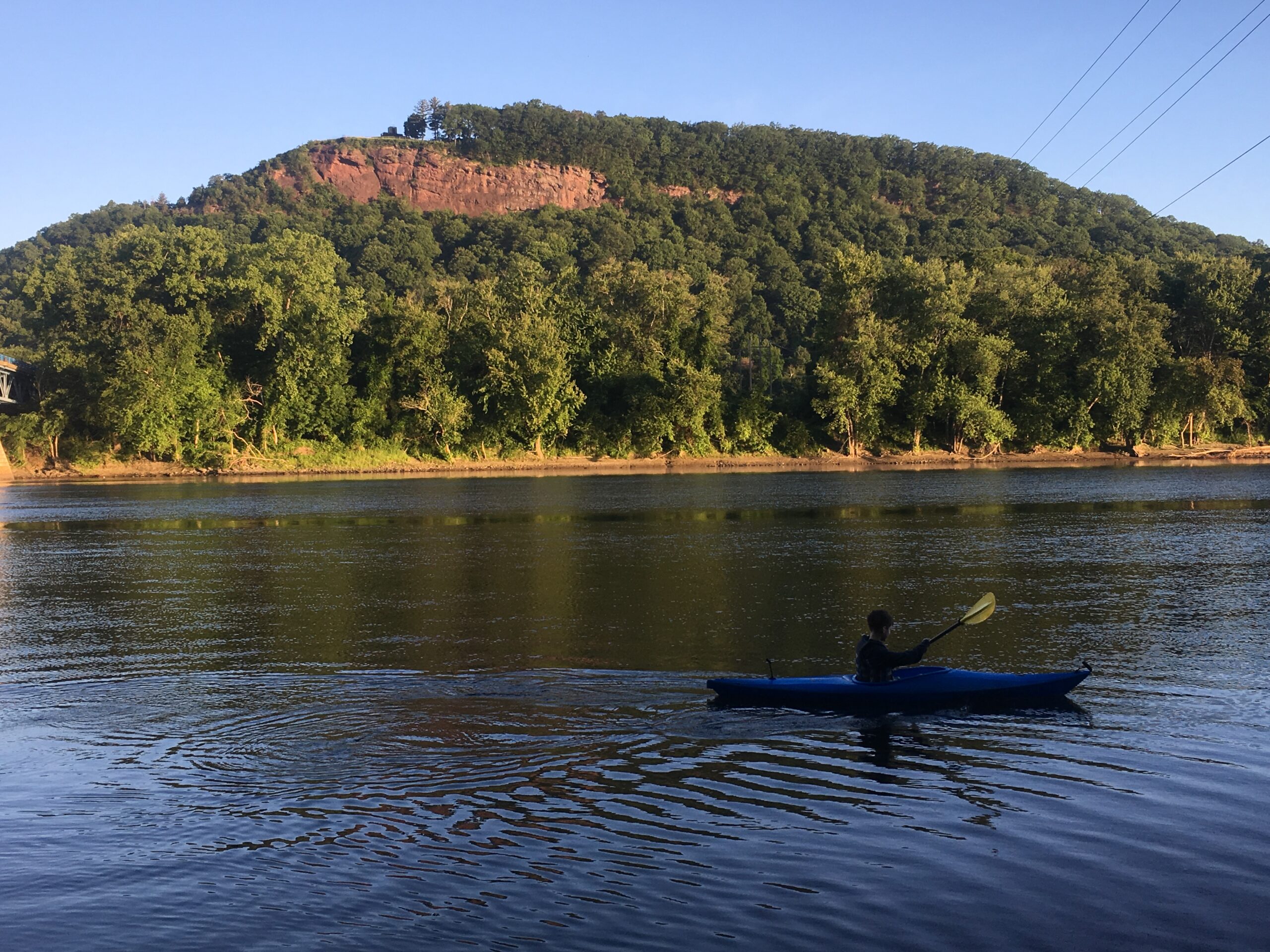 Once reviled as a polluted mess, the Connecticut River in western Massachusetts is now beloved by boaters.

As I drifted in my kayak along the densely wooded shores of the Connecticut River in the town of Hatfield, a leaping fish interrupted the morning stillness. Beyond the riverbank stretched miles of farmland where early-season vegetables were beginning to poke through the soil. Pink brushstrokes from the pre-dawn sky reflected on the surface, and rising mist lent a jungle-like quality to the lush foliage along the river’s edge. It was beautiful, dreamlike, mesmerizing, and as I soaked it all in, I thought, “I can’t believe this used to be a toilet.”

Not too long ago, the Connecticut River was called the “prettiest landscaped sewage system in the country.” However, beginning in the early 1980s, environmental groups in four separate states joined forces to clean up New England’s largest river, which flows for 410 miles from its source in northern New Hampshire to Long Island Sound.

Today, the Connecticut stands as one of the country’s great environmental success stories. It boasts some of the best fishing in the Northeast, with spring runs of shad and stripers, along with large year-round populations of bass, pike and trout. Bald eagles, hawks, osprey and peregrine falcons nest along the riverbanks, while wading birds stalk the shallows. Instead of repulsing people, the river now attracts anglers, paddlers and wildlife enthusiasts. And boaters. Lots of boaters.

From Mount Sugarloaf in South Deerfield to the city of Northampton, the Connecticut winds through a landscape of rolling hills and farmland. Although I may be biased, I think this section of the river is the most beautiful place in the world. I grew up in Northampton, but I’m not alone in my appreciation of the area’s beauty. Visit the river on any sunny day between the beginning of May and mid-October and you’ll find plenty of people fishing its waters, picnicking on its beaches, swimming, waterskiing or simply drifting along in inflatable rafts.

Several marinas and boat ramps provide easy access to the river. Two of the most popular entry points are Oxbow Marina and Brunelle’s Marina. Oxbow is located at the southern end of Northampton, on a well-protected offshoot of the river close to Route 91. A large public launch ramp is located at the southern entrance to the oxbow, just off Route 5.

Just downriver is Brunelle’s Marina, in South Hadley. A full-service marina with a four-lane ramp and picnic areas, Brunelle’s is also home to a great restaurant called Dockside that serves as the only dock-and-dine option on this section of the river. Boaters can tie up at the marina’s guest dock for up to two hours at no charge while they go ashore.

From Brunelle’s, it’s a short cruise south to the city of Holyoke, but the naturalist in me prefers the more scenic north. Between Brunelle’s and the Oxbow, the river squeezes between the Mount Tom and Holyoke ranges. More hills than mountains, with heights topping out at around 1.200 feet, they stand as dramatic walls bordering the river.

Atop Mount Holyoke is the Summit House, where visitors can enjoy a spectacular view of the valley. Nearby, boaters can dock at Mitch’s Marina in South Hadley. The marina sits near the foot of the Holyoke Range, and it’s a short hike to trails leading to the range’s seven summits.

North of the mountains, boaters will encounter beaches on small islands and along the riverbanks where they can drop the hook and enjoy a picnic, swim or barbecue. One such spot is Shepherd Island in the Rainbow Beach Conservation area. Long stretches of the river are lined by rolling farmlands that In the summer are filled with corn, asparagus, cucumbers and other vegetables.

Perhaps the busiest section of river is where it passes under the Coolidge Bridge, between Northampton and Hadley. The bridge is named for two-term president Calvin Coolidge, who was mayor of Northampton. At the eastern end of the bridge is Sportsman’s Marina, which rents fishing boats, pontoon boats, canoes and kayaks. Near the western end is the Elwell Recreation Area, which has bathroom facilities, a floating dock and is a great put-in spot for paddlers. This area sees a lot of boat traffic on summer weekends, with people cruising, waterskiing, tubing, Jetskiiing and kayaking.

North of the Coolidge Bridge is an old train trestle that’s now part of the Norwottuck Rail Trail, an 11-mile paved path linking Northampton, Hadley and Amherst along a former railroad track. Besides being incredibly scenic as it passes through the farm fields of Hadley, the path also has wonderful places to stop, including ice cream and food stands. My favorite is a place in Hadley called The Quarters. This small building houses a collection of classic arcade games from the 1980s, including Space Invaders, Centipede and Rampage. It also has a surprising large menu of apps and creative takes on hot dogs, plus ice cream and a full bar.

As the river winds through the towns of Hadley and Hatfield, it’s surrounded by more farmland and the occasional cow and horse pasture, some featuring long, wooden barns from the days when tobacco was grown and processed In these parts. Near a hairpin bend in the river is the Hatfield town ramp, also known as the Cow Bridge Brook Ramp. It’s a popular put-in spot for boaters, but note that the section north of the ramp to Sunderland is shallow and has a speed limite of 5 miles per hour.

Boaters in shallow-draft vessels should have no problem navigating the section between the towns of Sunderland and Deerfield, and it’s well worth the trip. Mount Toby to the east and Mount Sugarloaf to the west provide a stunning backdrop to boating on this stretch, South Sugarloaf peak is less than 700 feet high, but it rises dramatically from the river and features prominent cliff faces. Make a point to visit its summit, which offers an iconic view of the river and surrounding landscape.

While there’s plenty to do on the river, there’s even more to do on shore. Home to five major colleges, this part of western Massachusetts is a culturally vibrant area with creative restaurants, fascinating shops, live-music venues, museums, art galleries and beautiful parks. Stroll through the downtowns of Northampton and Amherst and you’re likely to find street musicians playing guitars, steel drums or violins near sidewalk cafes.

The area is renowned for its number and variety of eateries, among them Tibetan, Vietnamese and Lebanese restaurants. There are cheap dives and upscale, classy establishments. A personal favorite is FitzWilly’s in Northampton, featuring an interesting brick interior and excellent food. I also enjoy the Northampton Brewery, which was one of the Northeast’s first craft breweries long before craft beer became popular. You can eat on the brewery’s outdoor patio in summer, or next to a crackling wood stove in winter. At night. Northampton has more than half-a-dozen music venues, ranging from hotel basements featuring local bands to the Calvin Theater, which hosts major artists such as Ray Lamontagne and Ben Harper.

But while the area offers great nightlife, you may want to bed down early. Dawn on the river is not to be missed!